Damien O’Brien is well known magician to the stars and TV from Alexandra Burke to Kesha, He’s travelled worldwide to show his amazing talent, I caught up with Damien for a Q&A enjoy… 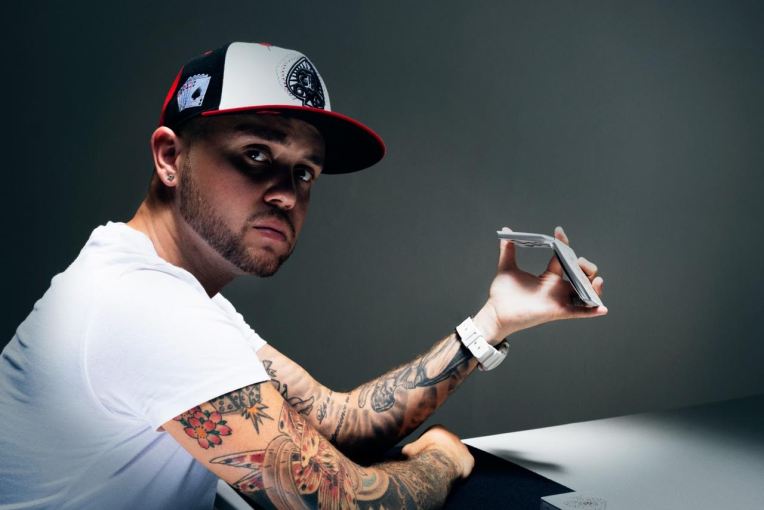 Scott – We seen you on “BBC 3 Killer Magic” what was it like? Did you enjoy the experience?
Damien – Killer Magic was a lot of fun to film , it gave us all a chance to show off our talents and to also reach a new audience , I personally loved the experience as I got to work with 4 amazing magicians incredible directors and producers plus I got to try out big illusions and tricks I have always wanted to do what was fun.
Scott – Your well known for your tricks with celebrities who has been your favourite and why?
Damien –  I would have to say Nelly has still been my favourite just because of his reactions he was so chilled out and just loved every second of it , but Alexandra Burke is a close second for me as she goes cray when you pull off a trick to her , see for me its not always about who I’m performing to its more about getting that great reaction
Scott – Out of everything you do from magician to hypnotist which is your number 1 trick is your personal favourite?
Damien – Hmmmm that’s a tough question as I have so many , but I think my favourite trick was from Killer Magic doing the card in the fish as it was so random and the guys just went absolutely crazy when the found their signed card in the fish , its reactions like that what makes magic so much fun for me.
Scott – Has there ever been a time something went wrong? If yes explain what happened.
Damien – Yeah sometimes things ain’t gone right and I have to fix it like I might get the wrong card and then I just have to make it lookalike I did that on purpose and recover you would never know I did something wrong as a good magician can recover.
Scott –  Have you got any plans doing a UK tour visiting city’s?
Damien  – I don’t have plans for a UK tour as I’m not really a stage magician so all my work is private booked but who knows maybe one day ill decide to create a stage show.
Scott – I recently brought out my book called “OUT” dealing with sexuality and bulling in school, If you have something to people getting bullied in school or workplaces what would it be?
Damien – It would be don’t be afraid to talk to people and let others help sometimes we are to proud to admit these things and to admit we need help , so my advise is you should never have to be bullied by anyone so never be afraid to ask people for help.
Scott – Is their anyone you like to meet to do tricks on that you haven’t already?
Damien – I always wanted to do magic to Eminem I grew up listening to his music the man is a genius so that would 100% be my first choice.
Scott – Now with BGT back on our TV screen, any magicians you enjoyed watching?
Damien – I think there has only been one magician i haven’t  watched to much of BGT I never do , but the one I saw he seemed OK hopefully we will see some more magicians.
Scott – What advice would you give young magician’s starting out?
Damien – PRACTICE !!! and perform as much as possible as it will help so much I know so many magicians who are skilled but can’t perform , the performance is everything I say its a good 80% and the other 20% is pulling of the trick so practice and perform as much as you can.
Scott – *This is a request question from your fans* Do you have snapchat?

All images used in this interview I don’t own. Supplied by Damien

Matt Jaffe is an American Singer/Songwriter, and founder of the band “Matt Jaffe & The Distractions”, I Skype called Matt to have a Q&A check it out..

Scott –  Your a amazingly talented singer/ performer who inspired you growing up?
Matt – My main inspirations are songwriters.  The people who originally motivated me to write and perform were mostly punk rock and New Wave folks like David Byrne, Elvis Costello, Joe Strummer, and Debbie Harry.  Recently, I’ve been really inspired by country music and Americana, artists like Hank Williams, Lucinda Williams, Gram Parsons, Townes Van Zandt.  Some of my favorite musicians, like John Doe and Old 97’s bridge these worlds really well.
Scott –  Can you remember the first record your bought?
Matt – I believe the first album I owned was “How to Dismantle An Atomic Bomb,” by U2.  Although I really dig some of U2’s earlier stuff, that particular record didn’t do too much for me.  The first actual vinyl album that blew me away was Elvis Costello’s debut, “My Aim is True.”  I found it in my parents’ basement, and wouldn’t stop spinning it.
Scott –  Your YouTube channel is a massive hit, Tell me which was your favourite one to film?
Matt – My favorite one we have up right now is a live video of our tune “Wander No More” (https://www.youtube.com/watch?v=lJQTYtakV-0).  It was filmed live, and I remember feeling very free during that performance.
Scott –  I seen your performed in some great places what’s been your most remember-able and why?
Matt – I really enjoyed playing at Cain’s Ballroom in Tulsa.  It had terrific portraits of Hank Williams and Bob Wills and Loretta Lynn and other incredible country acts.  I felt catapulted by that history.  And the people in Tulsa are real nice.
Scott –  Your new song “Write A Song About Me” is my personal favourite, Can you tell us what the song is about?
Matt – It’s meant to be a narrative of a relationship.  A pretty commonplace relationship, one that goes sour pretty quickly.  The twist is that the song sort of begins en media res with me being asked to write her a song, but only doing so in spite after that loving feeling had decayed.  The style of the music was meant to be a rockabilly travelogue a la Johnny Cash.
Scott –  If you had the chance to do a collaboration with anyone in the world who would it be and why?
Matt – I’d like to star in an Alfred Hitchcock movie.  I don’t think it’s going to happen anytime soon.
Scott –  Have you ever thought about going on American Idol or The X Factor USA?
Matt – Not really.  I don’t think original music belongs on those shows.
Scott –  What advice would you give to anyone who is looking to start out in the music industry solo or band?
Matt – Find a pure love of songwriting and performing.  If you’re doing it for money or attention or celebrity or any other kind of external validation, you’re going to be very disappointed, even if you succeed.  If you love music for music, nobody can take that from you.
Scott –  Do you advice to start up a YouTube channel?
Matt – I’m not sure, but I think people like videos that make them feel close to the artist, stuff filmed at home or in a DIY style.  They want connection.
Scott – What is your 3 top emoji’s you use all the time?
Matt – I’m afraid I don’t use emojis very much, but I like the dog emoji where its the profile of a dog, the dog emoji where its the head of a dog, and the thumbs up is a timeless standby.

The gorgeous Loren Green is well known for “EX ON THE BEACH” S2, I sat down with her to talk blogs, make-up, selfie tips and Mr right!

Scott – What can you tell us about  your experience on MTV Ex On The Beach?

Loren:  At the time it was so strange as it’s totally out of my comfort zone. I’m more of a homely shy girl but I’m glad I done it, it boosted my confidence and made me grow up and learn a lot about people.

Scott –  Any regrets doing the show?

Scott –  Do you still see / speak to anyone?

Loren: Speak to a couple of them occasionally 🙂

Scott –  You have your own blog site what can you tell us about it?

Loren: It’s all about beauty fashion and the occasional lifestyle posts. My own personal diary basically.

Scott –  Is it been something you always been interested in?

Loren: I’ve always loved arriving notes and keeping a diary and have had a blog for sometime but never had the courage to go public with it. And finally when I did I’m so happy with how it’s going – it’s been madness this month but so worth it.

Scott – You have some good selfie photo on your instagram what tips can you give?

Loren: All about lighting and a good camera. I’m not a fan of phone cameras so my blog one is perfect for that quick snap. + knowing your good side is a bonus as well, most my pictures are facing the same way.

Scott –  Some girls asked me on twitter… which make-up are you using right now? and which ones to stay well away from?

Loren: I LOVE Mac and sleek. My skin doesn’t take to well to a lot of brands they can make me come out in spots so i tend to stick to the same brands.

Scott –  how is your love life? met that Mr right?

Loren: Yes I’ve been with my boyfriend Steven for over a year now. He’s the one!

Scott – who inspires you?

Loren: My boyfriend – he’s always motivating me and telling me I can do things even when I think I can’t. He gives me confidence when I don’t have it.

Scott –  is there anything you can tell us what to expect from you in 2016?

Loren: YouTube will be happening for sure I can’t wait just to expand my blog and reach out to more people. 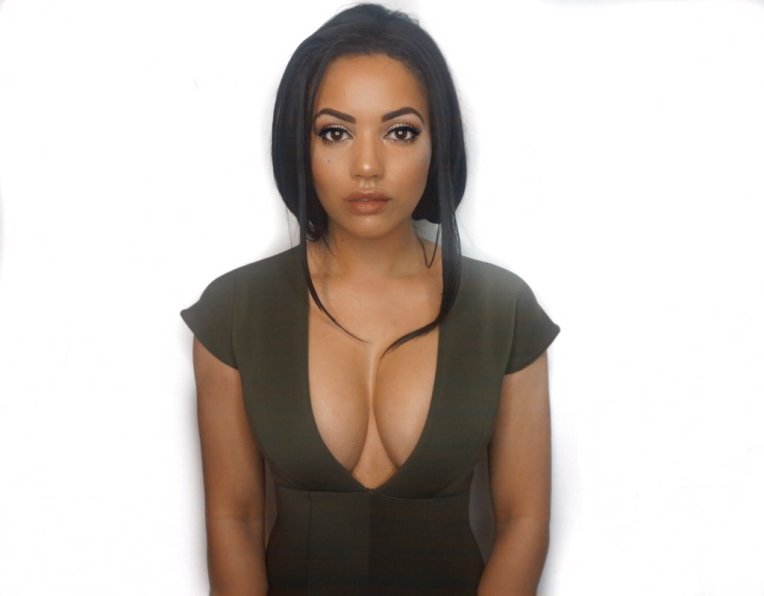